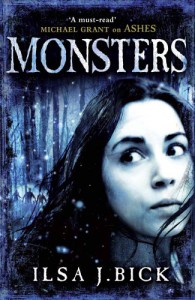 It is very rare that I am satisfied with the ending of a YA trilogy/series. At the end of Monsters I felt breathless, my chest contracting, like I'd been running a marathon. I feel slightly exhausted. I devoured this in two days, unable to put it down amid all my study, hoping and hoping that somehow, things would turn out alright.

Needless to say, Monsters, a huge chunk of a novel promising a lot, did not disappoint me. I was flipping those pages so quickly, so worried about what would happen to Alex and Tom and Ellie. I needed to know, and I needed to know now! Unfortunately, I still couldn't feel the same attachment to Chris and Peter and Wolf and the other characters, and so while their chapters were interesting and were essential to the story to show what was happening elsewhere and to tie up all the ends, a lot of the time I couldn't wait to get to the end in the hope that the next chapter would be Alex or Tom or Ellie. So many times they were so close to one another and I just wished they would all be reunited. Always a sucker for a happy ending.

Speaking of endings - this one was interesting. I'm still intrigued. I want to know what happened next! Where they went, what they did. I didn't realise until I got there that I wasn't ready for this to end yet. But a story like this doesn't really end. There was so much left, so much to rebuild. And what would be waiting for them at Houghton? It feels like a cliffhanger to a TV show, knowing that there won't be any more because it's been axed. Frustrating! I want to hang on to Alex and Tom and Ellie a little more. I want to know more about what caused the EMP in the first place, what happened to the rest of the world? On the other hand, for Alex it doesn't really matter at the moment. All they're thinking of is how to get through each day. They've defeated enemies before, but there will be more. There will always be more in a crazed apocalyptic world. After everything they've gone through, though, I think they can handle it. Possibly one of the strongest teams in YA lit. There is everything to love about this series.